Rial’s first voice-over role was some walla in the 1999 dub of Martian Successor Nadesico. In an interview with Otaku News, Rial said she had to talk for two minutes straight as folks in a crowd telling the Jovians to go home.[4] She would later land main character roles as Miharu in Gasaraki, Natsume in Generator Gawl, and the title character in ADV Films’ production of Hello Kitty’s Animation Theater,[5][6] the last of which was one of ADV’s best-selling DVDs.[7] In 2001, she voiced Izumi in the baseball anime Princess Nine and in 2002, she got to voice Hyatt in Excel Saga, which she listed among her absolute favorites.[5]

In 2003, Rial voiced best-friend character Kyoko Tokiwa in Full Metal Panic!, and got to reprise her for Full Metal Panic? Fumoffu and Full Metal Panic: The Second Raid. In the same year, Rial voiced Kirika Yumura, the quiet assassin partner in Noir. Rial said that Kirika was challenging because she had very few words but had to convey a lot of emotions.[5] She also noted that Kirika’s personality changed over the course of the series, so she voiced her to be more emotional in later episodes which drew some criticism from fans. She also voiced Lila in Najica Blitz Tactics where she also got to do a DVD commentary along with fellow actress Kira Vincent-Davis. The commentaries have become popular as she receives feedback from fans about them at anime conventions.[6]

In 2004, Rial started voice-over work with the anime dubbing company Funimation in the Dallas/Ft. Worth area. During that year, she voiced Amy in the long-running detective anime series Case Closed, and Lyra (and Dante) in the fantasy drama series Fullmetal Alchemist. Both of these shows were featured on Cartoon Network. She also voiced co-lead character Lumiere in Kiddy Grade.[8] Meanwhile, with ADV, she voiced Nyamo-sensei in the school comedy Azumanga Daioh. She had also taken over some character roles as Momiji in Blue Seed and Maya in Neon Genesis Evangelion. Rial said that it was very difficult to try to sound like the previous voice actors, especially Maya’s low voice, so she tried her own approach. She also got to voice Pen-Pen the penguin in Evangelion.[9] In 2005, she voiced the serious lead character Jo in a team of mercenary girls in the cyberpunk science fiction series Burst Angel.[10]

Rial continued to land leading roles in anime shows. In 2006, she voiced the title character in Nanaka 6/17, about a 17-year-old girl who, through an accident, has amnesia and regresses to her 6-year-old self. In Speed Grapher she voiced female protagonist Kagura Tennōzu, and in the ADV Films remake of Macross, she voiced Misa Hayase.[7] In 2007, she voiced Sakura in the English anime adaptation of Clamp’s Tsubasa: Reservoir Chronicle; Maria in Witchblade.[11] 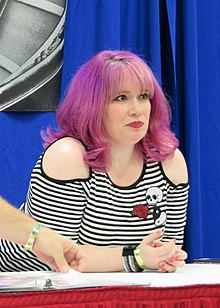 Rial at Wizard World Columbus in 2017.

Rial voiced more leads in 2012 with Shiro in Deadman Wonderland which also broadcast on Adult Swim, Stocking in the raunchy comedy Panty & Stocking with Garterbelt. In 2013, she voiced the heroine character Haruko Amaya in the harem comedy Maken-ki! and Iori Nagase in the school anime series Kokoro Connect. With regards to her lead role of Michiko Malandro in Michiko & Hatchin, which was released on DVD in 2013 and was broadcast on Adult Swim in 2015, Rial said that out of the 300 or so characters she had voiced, only two of them were Hispanic, and she liked that her character wasn’t a stereotype.[12]